INDIE Live Expo was held on Saturday, May 21st, 2022 &  Sunday, May 22nd and was able to introduce 488 games in total and the INDIE Live Expo Board would like to share some of its content. We would also like to announce the participation to「gamescom 2022」and are looking for Japanese games that can join us. 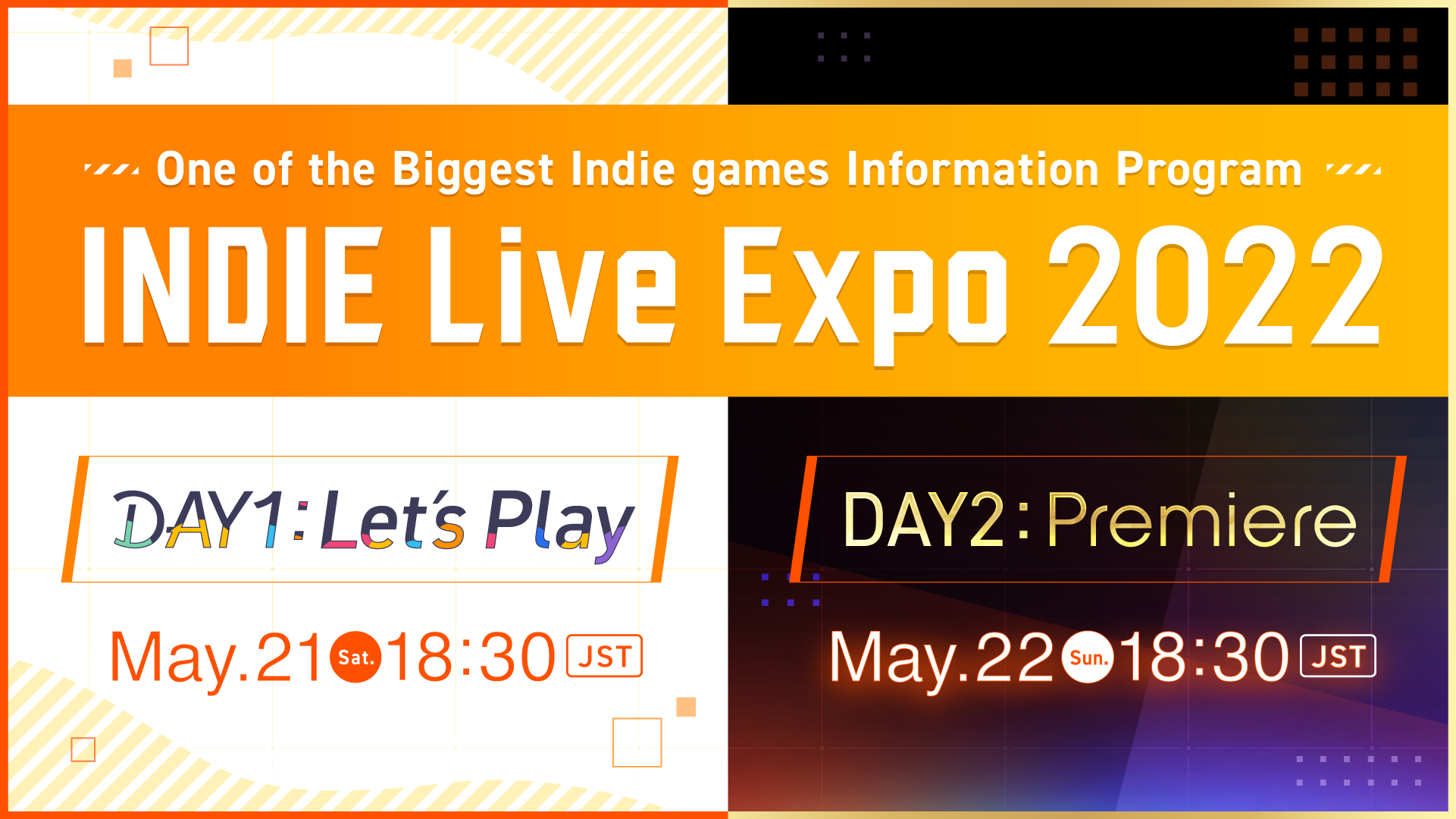 As the event being a 2 day event for the first time, we had different themes for each day.

Streamers around the world participated as simulcasts through our recruitment campaigns, and with their help we were able to reach to more viewers than before.

The archived stream of this event is available at the following URL. If you wish to review the information presented or re-watch any of the segments, please see below.

With the support from the Visual Industry Promotion Organization (VIPO, Chairman: Takayuki Matsutani, Chūō-ku Tokyo), INDIE Live Expo will open a booth at「gamescom 2022」one of the biggest gaming event in the world held at Koelnmesse in Germany. We will have a booth introducing Japanese indie games, called「Japan Pavilion」

For the this, we are now looking for Japanese indie games to exhibit at the booth.
If you or anyone you know is interested, please don’t hesitate to apply.

No charge for applying. We plan to select around 15 games.
Please refer to the INDIE Live Expo Official site or the application form (Jpn) for details.

「INDIE Live Expo 2022」launched a sale event in collaboration with Steam and Xbox.
A number of titles, including those featured in the program, are available at lovely prices.

The popular 「INDIE Waves」 showcased 395 games over both days which were presented by Hisanori Yoshida,  「Game Pick-up」 introduced must-see games selected carefully by the INDIE Live Expo Board and Media Partners, and 「INDIE Live Premiere」 was able to announce many never before seen news of up-coming games.

「Let’s Play Games」and 「My Indie Game Choice」 was a brand new segment of the event where one of the casts, waiwai, played games live during the show and entertained the viewers by sharing recent memorable indie games.

「Indie Game Let’s Play Awards」 awarded content (videos/streaming) that resonated with both the game and the content creator, and the Grand Award was announced at the end of DAY2.

This event’s 「Indie Studios Around the World」 focused on games from Indonesia, with Masatoshi Tokuoka giving an in-depth explanation of the studios and games surrounding the country. The 「Live Performance」 segment showcased Laura Shigihara singing to the piano, and the full Dainashi band members performed together for the first time. Shamio and KiRiKo brought an amazing performance that added to the already fantastic music.

In the 「Special Feature ,」 sponsors introduced information useful not only for gamers but also for developers and publishers, focusing on the efforts and services they can provide.

Bringing the hottest news of 10 up-coming games recommended by the INDIE Live Expo Board.
We presented information and videos that were released for the first time in the world. 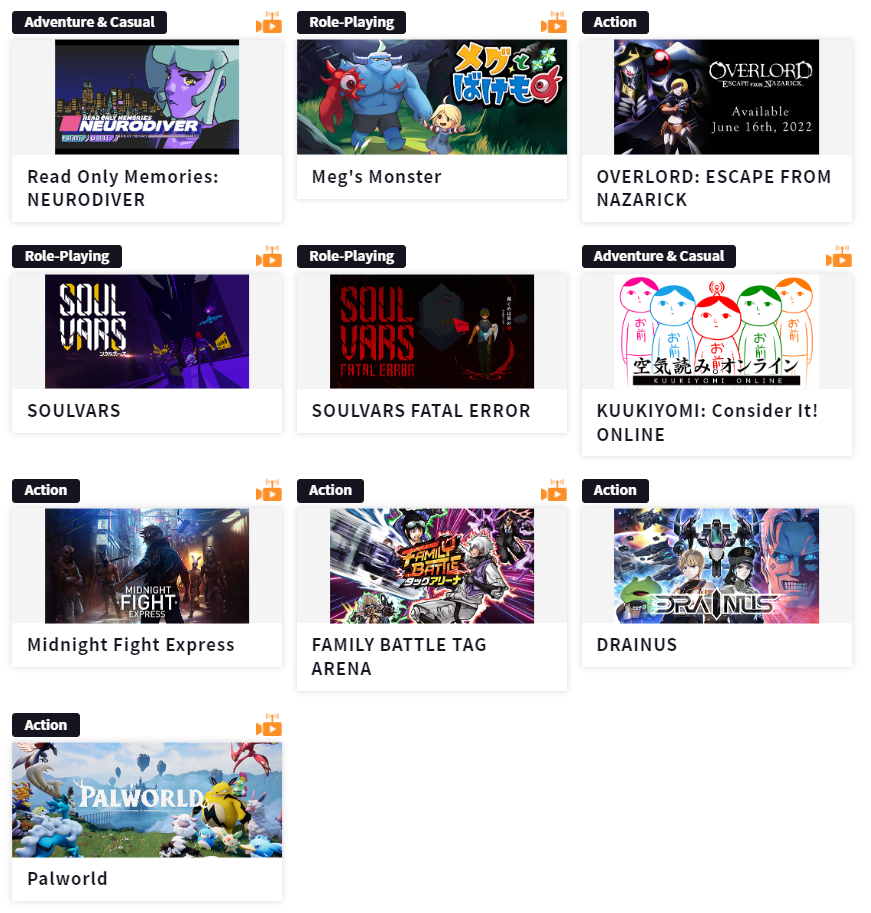 Featuring 12 games recommended by the INDIE Live Expo Board and Media Partners. We introduced, console announcements, full release information, major updates and other important information that every indie game players should see. 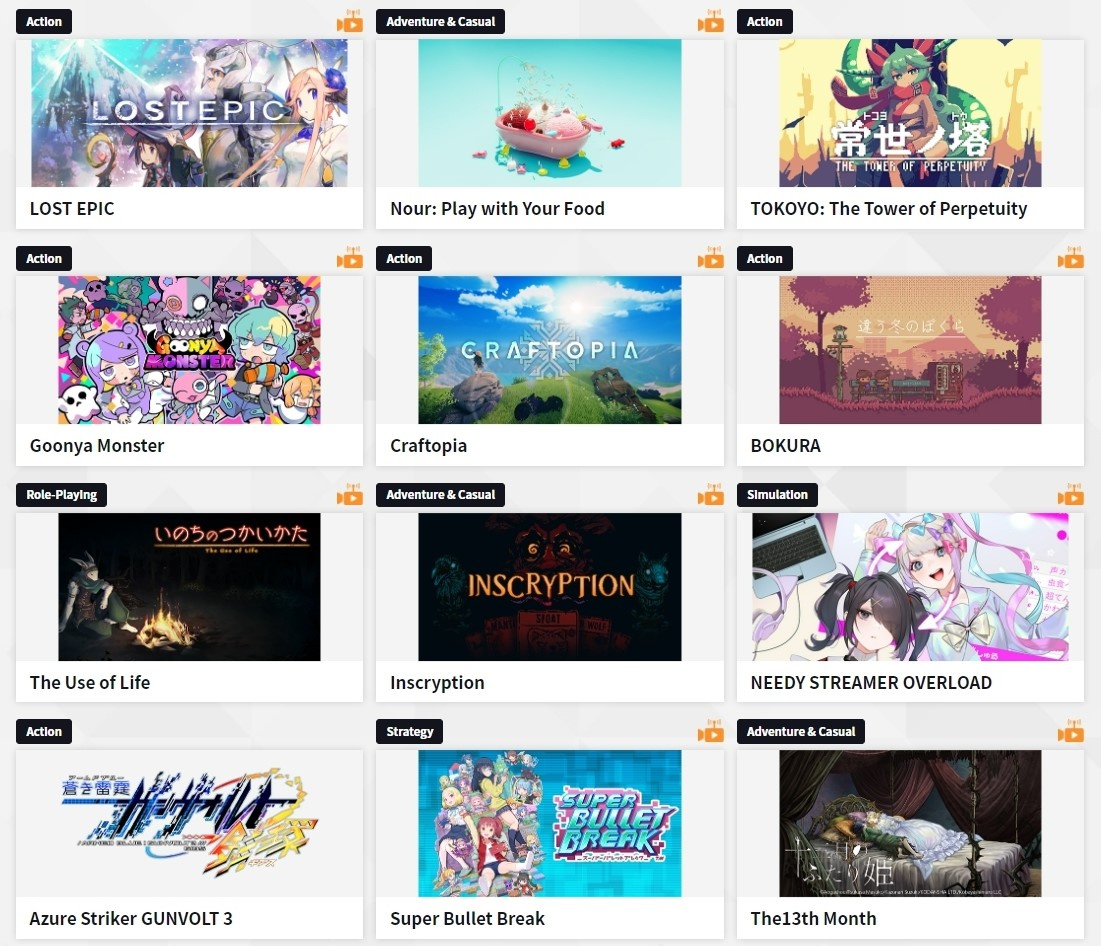 The Use of Life ／ Craftopia ／ NEEDY GIRL OVERDOSE

Introducing information from sponsors who support the show that are not only useful for gamers but also for developers.

#fingger A platform where you play together with the streamer!  Supported by fingger

Demonstrating the next generation streaming platform「fingger」which connects the streamers and the viewers. In addition to introducing current playable games, we got a first hand view of the next game「AtaRen: My Love Story is Yours to Choose!」

Freedom: For the Love of Games  Supported by Freedom Games

Showcased “App Generator” which helps the conversion of PC games to Android, “DLsite Official Translation” and “Translate Together!” where site users can help translate a product and connect it to the world.

Introduced “Captain Velvet Meteor: The Jump+ Dimensions” and “The Tower of Children”, a new indie game that crosses the boundaries of the industry between gaming and publishing.

An in-depth look at the PLAYISM games of 2022! Supported by PLAYISM

A close look at “Drago Noka,” which is now in stores, and the upcoming “Timothy and the Tower of Mu” and “SIGNALIS.”

The INDIE Live Expo Board presented the following awards to “Video Content” (Let’s Plays/Stream clips) that resonated between indie games and content creators and contributed to the both.

◆Teach Me How to Edit Award

「【NEEDY GIRL OVERDOSE】We’re going to make this Menhera girl a top streamer with the two of us! NIJISANJI Makai No Ririmu/Uzuki Kou」

◆When you watch the old videos you made, and realize you are repeating yourself even after all these years Award 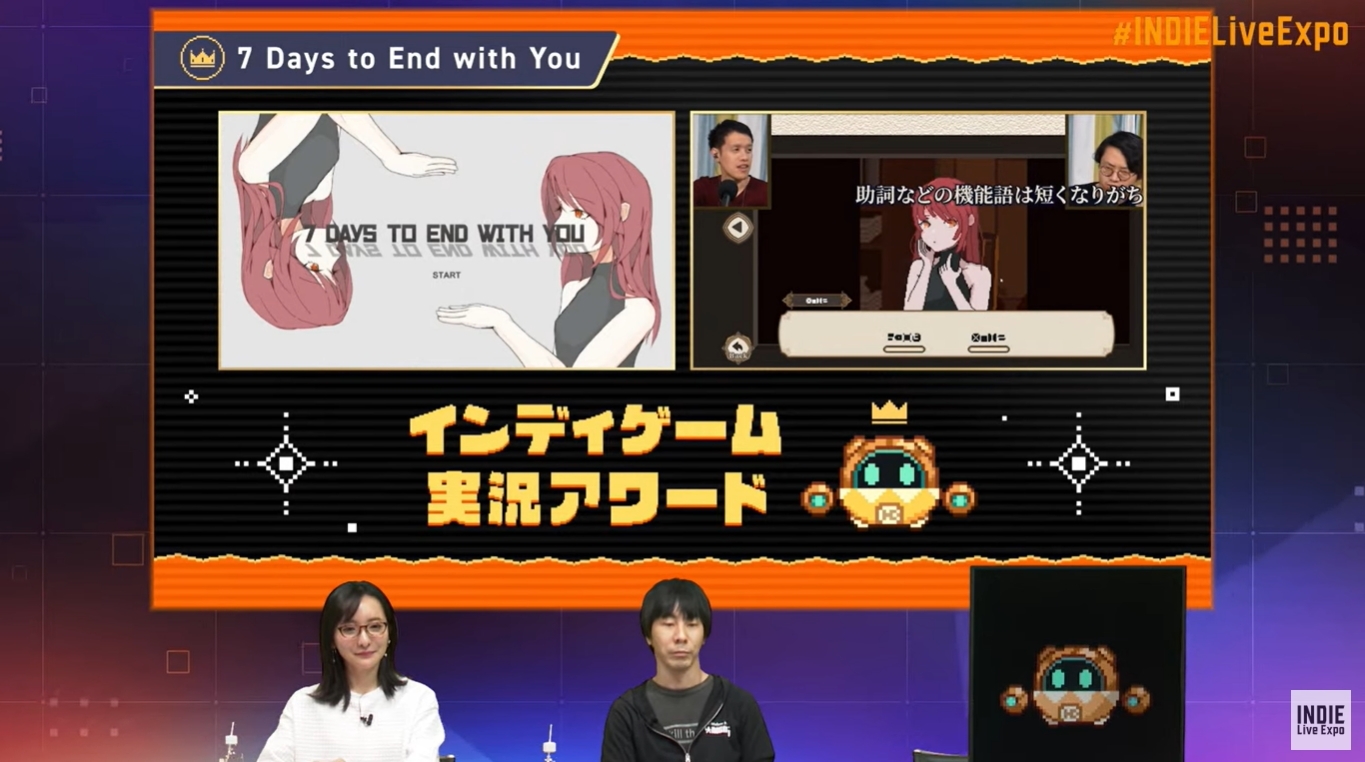 We have received a comment from Lizardry, the developer of「7 Days to End with You」

First of all, thank you for the award.
The video that received the award was a unique video by YuruGengoGaku Rajio
I laughed at the fact that someone can play this game from such a point of view.
As for the award, I would like to thank the many people who played the game.
Thank you so much.
I hope that indie games will continue to grow in every way,
and I would be very happy if I could be of help in any way.

The full list of games at INDIE Live Expo 2022!

With the site renewal, a new function, “Game Search,” has been implemented. You can search games using tags by genre, segment etc.

Please use it to find games that have caught your interest or that you would like to see again.

You can also check if games allow content creation.

「INDIE Live Expo Winter 2022」has been announced with the logo.

The event is scheduled to be held in the second half of 2022, and we are planning various entertainment and information for the next show, including the latest information on many indie games and exclusive announcements, to provide a program that indie game lovers will enjoy.

The INDIE Live Expo Board has created this newsletter to provide useful information for individual creators, developers and publishers on marketing & development. If you are interested, please consider subscribing.