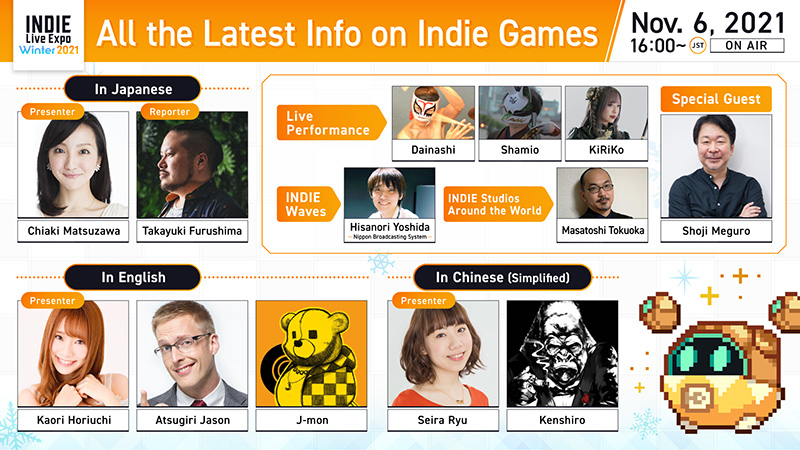 INDIE Live Expo Winter 2021 (ILE), the digital showcase connecting indie game fans globally which has highlighted more than 800 titles and gained more than 29 million views across three shows, reveals the hosts and special guests for the fourth show set to feature more than 500 games on Saturday, Nov. 6, 12:00 AM PDT on YouTube, Twitch, Twitter, and Bilibili in English, Japanese, and Chinese languages.

Shoji Meguro, composer known for his work on the Persona series and creative director of the PSP ports of Shin Megami Tensei, will appear as a special guest performer. He will premiere a new, exclusive music composition as part of the Indie WAVES showcases throughout the show.

Two of Japan’s most popular video game music cover artists, drummer Dainashi and shamisen player Shamio, return for ILE Winter 2021, joined by erhu player KiRIKo. Together, they will provide one-of-a-kind arrangements of indie music from games all over the world, set to premiere throughout the broadcast.

ILE Winter 2021 will feature INDIE Live Premiere segments featuring announcements of new titles and major updates on previously-announced games, along with INDIE Waves hosting a lightning round of 15-second showcases of games from all around the world. INDIE Studios Around the World returns for a segment highlighting many of the creative developers and wonderful games from Australia.

Finally, the show will reveal the winners of the second annual INDIE Live Expo Awards, as determined by an esteemed panel of jurors from the international gaming media and votes from the public. The public can vote up until the start of the show on Friday, Nov. 5 at 11:59 PM PDT, with the winners to be announced live during the broadcast.