For INDIE Live Expo Letter Vol.7, we would like to talk about the new segment「Game Pick-up」while going over the show.
The new segment was added to the show for extra promotion and using information we have gathered from the participants, we want to evaluate the effectiveness.

■INDIE Live Expo 2022 Show recap
The show was streamed over 2 days for the first time with different themes for each day.

The number of views set a new record for the show, and the total number of chats/comments posted on each platform during the broadcast was over 40,000, making it a highly engaging and successful event.

The number of games introduced for both days came to a total of 488, with many titles making world first announcements during the show.

The number of posts using hashtag #INDIELiveExpo on Twitter surpassed 8,000 in the two days of the show, with viewers posting support for the cast members, games introduced, and their impressions of the program. There were game developers saying that the event motivated them showing the broad viewership of the show.

Sales held in conjunction with the show included Steam as well as the Xbox platform. A total of more than 250 games joined the sale.

▼Effectiveness evaluation of Game Pick-up
Game Pick-up is a segment created specifically for game title promotion.
Showcasing up to 90 seconds of gameplay footage and introduction of the game during the program, as well as exposure in all media coverage related to INDIE Live Expo. We will present data provided by those who have actually used our product to verify the effectiveness of the segment. 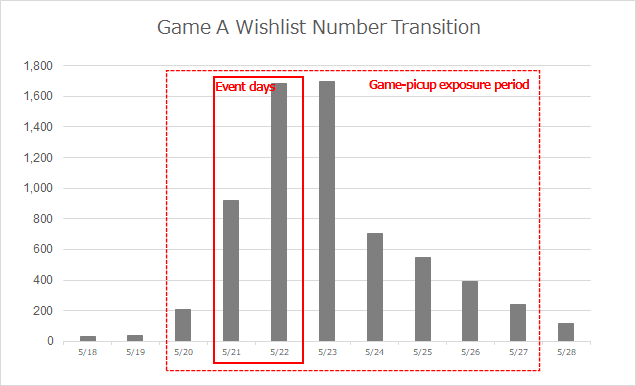 The already announced Game A
garnered over 6,500 wishlists on Steam through INDIE Live Expo 2022

Being one of the games featured on the INDIE Live Expo 2022 Steam Sale page,
not only did it have a high wishlist count on the days of the event,
it continued to increase throughout the sale.
・Game B（Released） 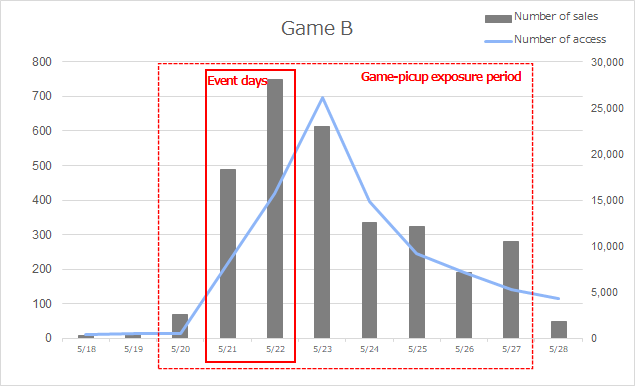 The already released Game B
updated their game on the day of the event and joined the Steam Sale.
Compared to the 2 days right before,
there was a 600 times increase in the number of purchases and access.
This is likely to have been achieved by simultaneously implementing action points or reasons to visit the platform, in this case an update.

INDIE Live Expo offers a variety of sponsorship plans.
The "Game Pick-up" plan, which focuses on the promotion and sales increase of individual games, was designed based on data analysis from past events.
As a promotional indicator for individual titles, we have obtained significant data, and we plan to continue the sale of this product.
If you are interested in promoting specific games, please consider "Game Pick-up".

○Prepare a landing page for the viewers to visit
There is a high possibility the number of access to web pages, wishlist registrations, and sales will increase after the day of the show.

When participating in the event, we strongly recommended that you set up some sort of web-accessible-page before the announcement of any information regarding your game.

○Align important milestones (such as new releases) with INDIE Live Expo
It is also effective to make important announcements at the INDIE Live Expo, as in the case of Game B, where an update and sale were held in conjunction with the event, resulting in a significant increase in traffic and sales.

We hope INDIE Live Expo can help you as the perfect time to announce important milestones, such as new releases, major updates, and demo versions.

○Participate in the sale when it is held
INDIE Live Expo has organized and is preparing to hold more sales in conjunction with the event, with the help from various distributors.
We have held a sale on Steam & the Xbox Store, but we are aiming to increase the number of platforms to have sales on.

Participating in a sale is not only an opportunity for exposure, it is also a great way to promote sales.
We hope you will consider participating in the sale.

▼Closing
Thank you for registering to the INDIE Live Expo Letter.
We will continue to bring you more information on an irregular basis, so please look forward to updates.